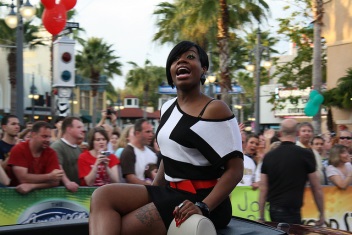 Fantasia Baby News (Why We Care)

April Caldwell
This is a new day in the media, and lately this means Fantasia baby news. Those unfamiliar with this phenomenon may recall that Fantasia Barrino is the reality show contestant who won the title of American Idol in its third season in 2004. She later won a Grammy for Best Female R&B Vocal Performance in 2010 for her single “Bittersweet” from her third album, “Back to Me”. Then Fantasia became pregnant with a married man, had an abortion, tried to kill herself, became pregnant again, tattooed the man’s name on her chest, had a baby, and then split up with the married man. The celebrity gossip columns have been aflame with the ups and downs of the R&B singer’s social life, and as a result, we have a media phenomenon called Fantasia baby news.

And so, one may ask why we care about Fantasia baby news. There are a few simple explanations that actually raise more complex questions about celebrity itself. First, we empathize. Many of us have made relationship mistakes in the past and we can experience that again by following along. We have experienced ups and downs similar to these. Some of us even have the Tattoo of Doom, a bit of ink specific enough to guarantee that fate will destroy the relationship it represents, whether this is a marriage or a favorite band. We also experience the darker reflection of empathy, schadenfreude, a sort of pleasure derived from the misfortune of others. We like to see the rise of a celebrity, coupled with a similarly meteoric fall.

This does raise further questions, however. Why do we care about celebrities at all? Why can we not simply enjoy the music, films, or writings of an artist without also feeling the desire to delve into that artist’s personal life and experience their highs and lows? For the large part, we have only conjecture on this subject. Are celebrity phenomena like Fantasia baby news a sort of substitute connection to our tribal history? We evolved as a tribal species and we maintained this limited social circle for tens of thousands of years. Yet our social lives now comprise a web of associations as tribes have come together and merged onto local, national, and increasingly global communities. Perhaps there is still a part of us that needs to associate with one another on a tribal level. To facilitate this, we may have adopted the celebrity pool as a sort of substitute tribe. Our social circle is generally familiar with the same group of celebrities, so they form a common social link between ourselves and others.

Could it be that celebrities are our new tribes? Perhaps. If so, then Fantasia baby news, Lohan rehab drama, and Spears head-shaving extravaganzas are here to stay.