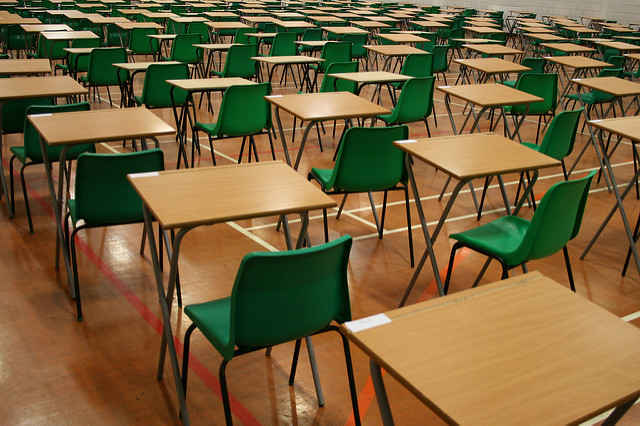 Standardized Testing: Are There Benefits?

Daniel Nguyen
(Can preparation for the ACT & SAT help students in college?)

While the majority of standardized testing structures today feature inherent problems, the utilization of their practice oriented design can benefit students preparing for college-level work.

Standardized testing has many endemic structural flaws that make it problematic when gauging the potential proficiency of college-level students. Sometimes they fail to account for the individual backgrounds of test takers while striving to be universally qualifying. Inevitably, by their very nature, they exclude the multitude of unique intelligences that fall outside the realm of standardized testing’s grasp (e.g. astuteness, creativity, drive, etc.).

But despite their numerous flaws, college qualifying exams can also provide students with the opportunity to showcase skills in academically centered areas that most colleges value and require. The ACT tests students in the broad core subjects of academia like English, Mathematics, Reading, Science Reasoning, and Writing. The new SAT updated in 2016 tests students in similar areas such as Reading, Math, and Writing. These areas, while limiting, can showcase the skills of students who demonstrate inclination for the aforementioned subjects.

As the old adage goes, practice makes perfect. Preparing for standardized exams for most students requires a lot of mental exercise and determinacy. These skills and the practices that enforce them provide students in the long run with the mental consistency needed to succeed in college and life in general. The Cornell College of higher learning suggests that students study on average 4-6 hours every day. And that’s only in the afternoon and evenings! They recommend 6-8 hours every day for the slow reader, so almost double the amount suggested for regular readers. This can amount to upwards of 28 hours per week (this is including weekends), and up to 56 hours for the slowest readers. Take into account again that these time estimates are suggestions for the “average student”, leaving those with higher involvement in extra-curriculars responsible for the accomplishment of the same amount of coursework in a smaller degree of time, meaning the majority of students are woefully unprepared for the practice and studying demands of college-level work.

While these time frames seem appropriate for full-time college students, representing the same time frames required at part-time and full-time jobs, the reality of student study time is much less. A study of college life has shown that, on average, college student study 10-13 hours every week. This amount of study time averages out to less than 2 hours every day; less than half the minimal amount of studying suggested by Cornell College. For the prospective students of higher learning institutions and younger students wishing to attend, the reality of student studying represented in colleges nationwide is unfortunately miniscule in the amount demanded at higher learning institutions. So the argument could be made that practicing the memorization work required to ace standardized exams helps prepare students for the hard work of studying and memorization needed to succeed at the colleges of their choice.

The disparate realities of college-student-study-time and the recommended time should prove a harsh fact for prospective students. Standardized testing recommends numerous amounts of practice in preparation for the exams. The SAT Bluebook is the most prominent example of an exam service attempting to provide students with equal opportunity. As shown in the most recent examples of the book, nearly half of the book is dominated by practice exams, 10 in total. Test prep companies like Barron’s and The Princeton Review also feature numerous practice exams in their SAT/ACT prep books. The practice work ethic standardized tests fosters can not only contribute to the growth of student’s attention and studying focus, it can also help facilitate the development of critical academic skills.

As discussed before, the subjects tested on standardized tests like the ACT and SAT provide students with background knowledge an unfair advantage over other students of comparable competence.

The academic skill sets fostered by standardized test preparation enhances students' abilities to succeed in college. These skills include but are not limited to the ability to make split-second decisions and carry out work in high intensity situations where time constraints limit the range of indecision and contemplation allowed during examinations (ie: prioritization).

Among the top skills recommended for college students, time management and problem-solving are most commonly seen as essential to success in a university. Standardized testing supports time management skills by forcing students to adhere to a strict examination time slot that facilitates the development of pacing skills, vital when taking similar timed tests in college. The skills associated with problem-solving (e.g. close-reading, critical thinking, reasoning, etc.) are pivotal to success in standardized testing and colleges. The SAT in particular stresses the reasoning aspect of the exam that tests students’ understanding of a problem’s intricacies and nuances.

While standardized testing showcases a small facet of a student’s abilities, they can also provide students who adequately prepare for them the skills and habits that colleges require. In the judgement of standardized testing’s relevance in college admissions today, it’s vital to consider the pros and cons of the practice. This means considering the portion of the student body that benefits from the practice’s endorsement of college-relevant skills, and addressing the practice’s unequal standards at the same time.

The ultimate consideration shows that for students who believe that tests like the SAT and ACT don’t accurately represent their abilities as prospective college students, there are plenty of institutions beginning to make the submission of standardized testing scores optional. And for those who believe the tests allow them to develop skills relevant to their potential efficiency in college, preparation for standardized testing still remains a prevalent requisite for colleges across the U.S. and internationally. More and more, it is becoming relevant for this reality to allow students to choose and decide for themselves whether standardized testing is right for them.