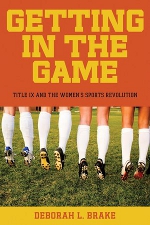 Understanding Title IX by "Getting In The Game"

Deborah L Brake
Title IX is one of the few laws to have infiltrated popular culture to the point where you could find it on a bumper sticker. There are Title IX shirts, mugs, caps, even a clothing catalogue sales company named "Title IX." (And yes, there are also Title IX bumper stickers.) It is the rare federal law that has its own veritable fan club. But Title IX also has its critics. There are not as many of them, but they are vocal and relentless, blaming the law for hurting men’s teams, burdening schools with unnecessary bureaucracy, and pushing sports for girls and women who would rather do other things. Despite its notoriety, the law is often misunderstood. It did not equalize funding between girls’ and boys’ sports (in fact, it did not even set out to do so), as some fans have claimed. Nor is it a "quota law" that requires schools to cut sports for men or add them for women who have no interest in playing, notwithstanding the claims of some critics. Partly, the law is misunderstood because it takes such a creative and unusual approach to discrimination—it is a standout in discrimination law—largely driven by the distinctive setting and unique aspects of competitive sports.

Title IX, enacted in 1972 as part of an omnibus education bill, applies to all aspects of federally funded schools, colleges and universities, not just athletics. In fact, the core provision of Title IX says nothing about sports and is, at first glance, rather simple: "No person in the United States shall, on the basis of sex, be excluded from participation in, be denied the benefits of, or be subjected to discrimination under any education program or activity receiving federal financial assistance…" [20 U.S.C. §1 681]

The law’s ban on sex discrimination extends to all aspects of educational institutions and throughout all of their programs and activities. The many areas in which the law has had a big impact include sexual harassment, the treatment of pregnant students and mothers, admissions to graduate programs, single-sex classes within coed schools, and gender stereotyping in tracking students within curricular programs. But the law has been the most controversial—and the most celebrated—in its application to sports.

As the pre-Title IX generations have aged, post-Title IX generations of girls and women have had to be reminded that there was a time, not so very long ago, when girls and women played "half court" basketball in school, if they played at all. College athletic scholarships did not exist for girls in those days, and the main physical activity available to them was cheerleading. Today, we see female athletes everywhere: on cable television; on soccer fields from our car windows; in the sports pages (albeit, not often enough); within our own families, in uniforms, dressed to play; and even on television selling shoes (the Nike campaign from the 1990s, "if you let me play" was a blockbuster). Some critics quibble about cause and effect, but sport studies scholars have made a convincing case that the growth in female athletic participation is a direct result of the passage of Title IX and the pressure it placed on schools to add girls and women’s sports. In 1971, only one in twenty-seven girls played high school sports. Today, that number is nearly one out of every two. That is a sea change that is nothing short of revolutionary—not just for the world of sports, but for the images and understandings of gender roles in the broader culture.

How did Title IX come to play such a role in sports and in American culture, and why is it among the most well-loved and yet controversial laws of our time? In 1975, a critical decision was made to eschew a "genderblind" approach to sex discrimination in athletics. That decision paved the way for a more substantive and creative legal standard than what has been applied in other areas of sex discrimination law. The development of legal standards under Title IX to apply to competitive sports entailed deeply contested questions about the meaning of equality, and what it means to "discriminate" in a setting marked by gender difference. The decision to allow sex-separate sports teams started Title IX down an uncharted path of what "separate but equal" might mean for girls and women who wanted their own teams in sports. What ultimately emerged is a legal test that allows for separate teams, but presses for equality in the opportunities provided to both sexes.

My new book, Getting in the Game: Title IX and the Women’s Sports Revolution (NYU Press 2010) tells the story of the law’s development as it applies to sports, and explores the theoretical underpinnings of the choices made along the way. It ultimately supports the direction the law has taken, while exposing with a critical eye the ways in which it has fallen short. It is written for an academic audience, but also for non-academics and non-lawyers interested in learning more about Title IX and its effect on women—and men—in sports. As we approach the 40th Anniversary of Title IX (coming your way in June, 2012), the major questions explored in the book—the infamous three-part test for participation opportunities, the controversy over boys playing on girls’ teams, whether to count cheerleading as a sport, whether Title IX has done enough for women of color, whether women belong in contact sports, the blown budgets in men’s sports and lingering inequalities in the treatment of female athletes, the declining percentages of women coaches, cuts to men’s teams and the controversy over whether Title IX is to blame, and the persistence of sexual harassment and abuse in sport—remain timely and urgent.

Deborah L. Brake is a Professor of Law and Distinguished Faculty Scholar at the University of Pittsburgh School of Law. Her book, Getting in the Game: Title IX and the Women’s Sports Revolution (NYU Press 2010), is available for purchase at amazon.com and nyupress.org.