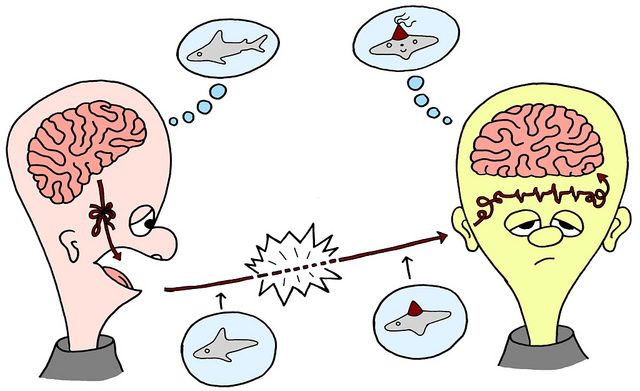 Five Ways to Communicate with Someone Who Doesn't Speak Your Language

Courtney Liddell
Communication: the foundation of building relationships. It is hard to imagine how a society would function without being able to properly express emotions and feelings. However, there are instances where you might be faced with that exact dilemma.

Scenario: You are waiting at the bus stop to go to an all-exclusive paid vacation: room, food, activities; basically anything you can think of, free of charge. While you are waiting for the bus, a seemingly friendly stranger sits next to you. You try to start up a conversation, but there is one problem: They are not responding. They are just smiling and nodding to your complaints about the Oakland Raiders not going to the Super Bowl, yet again. As you look at your phone for the time, the person taps you on your shoulder and seems to ask you a question. Yet another problem arises: you don't understand what they are saying. Then it dawns on you that the person is not brushing you off, they just don't understand the language you speak, and you don't understand their language. Clearly, language barriers can provide some obstacles in communicating. However, these obstacles can be overcome.

1. Use Simple Words in Your Language
Simple is usually the best method. Why? Because there will be a higher percentage of individuals that will be able to understand. For instance, it is a standard practice that most newspapers in the United States use simpler words because the average reading level is around 8th grade. Using simpler words can help you break down minor roadblocks. Common phrases like “hello,” “my name is,” “how are you,” “I'm fine,” and “goodbye” are good, simple phrases to use for overcoming language barriers. Also, it is important to avoid using slang and jargon. Using such phrases as “shoot the breeze,” “chill out,” and “rip off” may lead to confusion, and might even offend someone who doesn’t know not to take the meaning literally.

2. Pictures
Hieroglyphics were once a vital part of how Egyptians communicated and visuals are a major part of communication today. Images may provide a way to communicate without having the artistic skills like Leonardo da Vinci and Claude Monet. A smiley face can express happiness, stick figures can represent people, and a heart can express affection. There may be difficulties examining and figuring out the images; however, it may lead to progression of overcoming the language barrier. Think of it as an entertaining game of Pictionary that you can use to increase each other’s vocabulary in the new language. Also, if one or both of you are carrying a cellphone with internet access to actual pictures, you might not even have to draw.

3. Body Language
Speaking of Pictionary, charades can be a fun way to communicate. Body language or non-verbal communication is another way to express feelings and emotions. In the United States, frowning usually means you are displeased with something, waving can be a form of a friendly greeting, and a thumbs up could mean approval or congratulations. Remember though, the meaning of body language and gestures vary from country to country. For example, crossing your legs is viewed as disrespectful in Asia or the Middle East, and nodding your head up and down means something negative in Bulgaria and Greece. One more thing, let’s not forget the most effective way most children learn new words and increase vocabulary: just point! When it comes to communicating and learning new words in a completely different language, your index finger will rarely let you down.

4. Write it down
Going back to the basics. If all else fails, try writing down what you want to say, then have the other person write it down. Even though, you may not be able to understand the language, you may be able to help each other understand what the meaning is phonetically. Of course, this technique varies, and knowing some of the sounds and pronunciation of the alphabet will help.

5. Repeat and Learn
Let language barriers be a thing of the past. The best way to overcome the language barrier is through repetition and practice. There are premium language programs like Rosetta Stone and free services like Duolingo and Memrise that can teach you some basics, then it’s all about practicing. Depending on your native language and the language you are learning, you may find out there are common words between the languages. I am currently learning Dutch, and have found that some words are exactly the same or very similar in English.