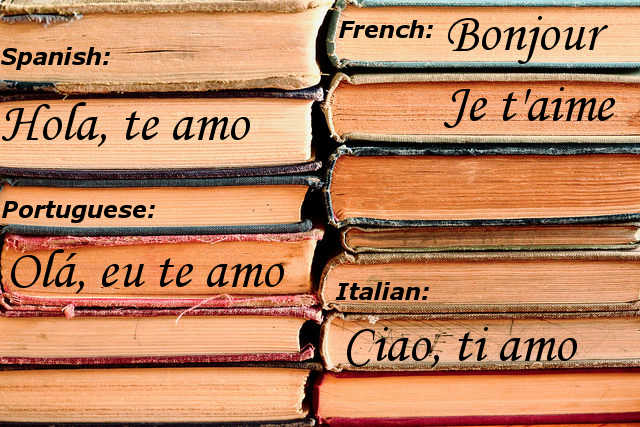 The origins of the Romance languages date back centuries ago. Spanish first appeared in the notes of Latin religious texts in the 9th century. Portuguese was first brought to the Iberian Peninsula by Roman soldiers all the way back in 216 BC. During the 17th to 20th century, French was the most used language for diplomatic and international relations. Italian first appeared in Latin documents and short texts in the 10th century. By the 15th century, Latin and Italian were being used for technical and scientific texts. Each of these languages began to appear around the same time and has clearly existed for quite a while now.

As old as these languages are, the top four Romance languages are still highly spoken world-wide by millions of people today. About 470 million people speak Spanish as a first or second language. Spanish, also known as Castilian, is predominantly spoken in Spain but also in 22 other countries mainly in the Central and South Americas. Portuguese, on the other hand, has approximately 220 million speakers. Portuguese, mainly spoken in Portugal and Brazil, is the most spoken language in South America and the second most spoken language in Latin America after Spanish. French, the third most spoken language in Europe, has over 338 million speakers. French is the official language of nearly 30 countries and, in addition to being spoken in Europe, is spoken in parts of Africa, North America, South America, Asia, and Oceania. Italian, mainly spoken in Italy, Switzerland, and Vatican City, is estimated to have 60 million speakers across the globe. Italian speaking communities can be found in countries such as Australia, Brazil, Canada, the UK, and the USA.

These languages, spoken by millions of people in all different parts of the world, share multiple commonalities due to the fact that they are all derived from Latin. Spanish, Portuguese, and Italian are all orthographic languages meaning that words are written as they are pronounced. Similarities between the Romance languages have been found in conjugations, grammar, and vocabulary. For example, one common factor shared is having masculine and feminine nouns. Also, common rules include adjectives following the noun and having the sentence structure of subject-verb-object. The Romance languages also tend to have similar vocabulary. While Spanish and Italian have 85 percent vocabulary similarity, Spanish and Portuguese share 89 percent. For example, the phrase “to come” is “venir” in Spanish, “vir” in Portuguese, “venir” in French, and “venire” in Italian. The phrase “I love you” translates to “Te amo” in Spanish, “Eu te amo” in Portuguese, “Je t’aime” in French, and “Ti amo” in Italian. Differences between the languages tend to be phonetic rather than structural and lexical (vocabulary). Even though French has an 89 percent lexical similarity to Italian and 75 percent similarity to Spanish and Portuguese, non-French speakers have a hard time understanding spoken French. Studies, however, have shown that written communication between the Romance languages is easier to understand than spoken communication. These results suggest how similar these languages are grammatically.

There are many benefits of learning more than one language. If you want to become a polyglot, a person who knows and is able to use several languages, consider learning two or more of the top four Romance languages. Knowing these languages is ideal if you are thinking of moving or travelling to areas of the worlds where these languages are predominantly spoken. Knowing several languages opens the door to many job opportunities and is essential for having successful business. In addition, knowing how to speak multiple languages opens the means of communication with many people from different cultures. The great thing about this family of languages is that if you learn one, it is a great foundation to learn the others since they are in many ways similar. If you want to improve your knowledge and linguistic skills, learning the Romance languages would be the best place to start!