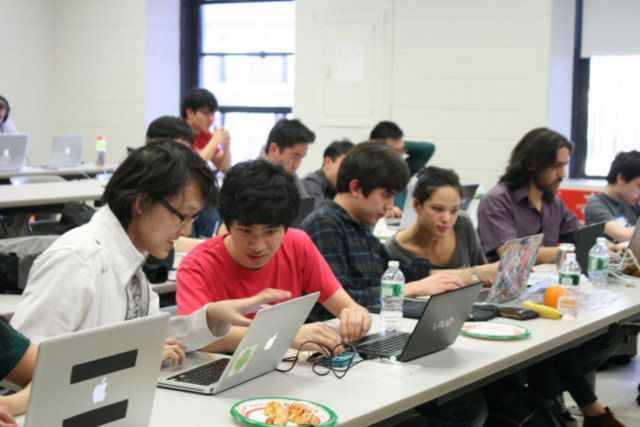 Camille Torre
Coming to a new country can be particularly intimidating when the only thing you care about (ppffff…. Who cares about academics, the weather, or the food, amiright or amiright?) is making friends. The scary part might not even be talking to someone new but rather seeing if you can fit in a culture that is stereotyped to have such a rigid culture and structured (albeit potentially progressive) social scene. Meaning, the problem isn’t too big when you look at it from an individual perspective (ie the ability to make at least one friend), but rather if you can make a security network (ie a group of friends) in a foreign community despite a possible language barrier.

Well, if it makes you feel any better, the whole country is feeling this problem. The majority of colleges have a division between domestic students and international students. Not only does this mean that international students are feeling a disconnect between themselves and the school (as in they do not affiliate good times to the academic institution), but these students aren’t receiving the experiences they deserve and domestic students are missing an opportunity to diversify their perspectives.

So the question becomes, what can Ivy League schools (which tend to have at least around 12 percent of their student body coming from outside the US) do to erase this divide and help international students make friends with students who speak their home language as well as with those who don’t; here are a couple of options.

OPTION #2 CREATE SMALLER GROUPS (POSSIBLY ONE ON ONE) OF DIVERSE INDIVIDUALS INCLUDING BOTH INTERNATIONAL STUDENTS AND DOMESTIC STUDENTS
Because it is harder for larger groups of people to organize, finding an optimal group size (maybe five students) and creating a meeting time as well as something to do can be helpful for international students to find domestic friends. In my personal experience, international students usually don’t spend time with students from the United states because they get tired of constantly trying to keep up with the fast paced English and “slang vocabulary” that American students sprinkle in their language like five year old children do on their cupcakes. More exposure to this sort of language and patient domestic students can easily develop a repertoire of American slang for international students with enough contact, communication and bonding. The pros to this method include a greater amount of communication between international students and domestic students establishing more cultural education for both sides. This program would include more resources from the Ivy League schools in order to create these groups and activities.

Regardless of the complete plan, it is important for international students to receive the experience they have imagined and create these bonds that they may utilize in their futures. These methods would also help domestic students digest the increasingly globalized world many domestic students face, particularly when entering the business world, and not remaining culturally ignorant to some of the most successful nations in the world. Ultimately, this movement to integrate international students into the Ivy League community at large is an obligation that should not be taken lightly by these schools.