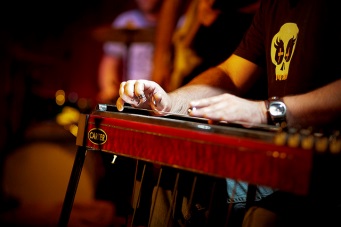 Pedal Steel Guitar Lessons: What You Need to Know First

Joe Cook
HOW THE PEDAL STEEL GUITAR ORIGINATED
The pedal steel guitar originated from the steel guitar. Essentially this was the same set up as the aforementioned instrument except it did not include pedals that allowed for change in greater variation in key. This more rudimentary instrument came about some time in the late 19th century and was largely used in Hawaii. This instrument became more popular in the United States in the 20’s and 30’s. Since that time, the pedal steel guitar and its development as an instrument with the addition of pedals has helped in the progression of more modern country music and western swing and later jazz and blues.

THE PARTS OF THE PEDAL STEEL GUITAR
The instrument looks sort of like the top half of a guitar laid on a table although the pedal steel guitar is not closely related to a guitar. Older pedal steel guitars had six strings, the more modern ones generally have ten but some have up to 14 strings. The tuning pegs are located at the end, each peg controls one string. Small rollers sit near the nut, helping to prevent strings from getting stuck if they are being raised or lowered. The strings sit much higher on the neck of a pedal steel guitar and its frets are painted on for intonation purposes for the musician but not utilized like a guitar’s frets. A bridge sits at the end of the neck on the right side of the instrument, helping to lift the strings off the neck. Another row of individual rollers also sits near the bridge, which roll according to the pedals and levers you’re pushing with your feet and/or knees. At the right end of the instrument, there is a pick-up that makes sound come out of the amp.

WHAT ALL THE PEDALS AND LEVERS DO
The right foot pedal is typically used to regulate the volume of the pedal steel guitar. The left foot usually utilizes one or more pedals that control key. Similarly, the knee levers can be positioned under the pedal steel guitar so that by moving your knee to the left, right, or up you can change the note or key that is played. The advantage, and in some cases disadvantage, of using the pedals and levers over the slider is that these pedals only affect one string at a time where as the slider, if perpendicular to the length of the string, changes the vibration length of all of the strings touched at once.

HOW SOUND COMES OUT OF THE PEDAL STEEL GUITAR
While your feet and or knees are pressing on pedals or levers, one hand will hold a solid metal slider. Most commonly this slider is a few inches long and made of steel but some artists will use bottles or combs for more rugged effects. Because the strings are so high on what is usually the fret board, the length of the instrument’s string vibrations are shortened or lengthened by the metal bar curtailing vibration to the left side of the slider. The hand that is not holding the slider will usually be plucking. Because of the rigidity of the strings, most musicians use a thumb pick and two to three finger picks to pluck the strings as either individual notes or chords that go along with what the slider is playing. These notes all vibrate creating noise down the string, reverberating to the pick-up so that this music plays out through its amp.

Ultimately, learning the pedal steel guitar can be a challenge. Getting used to the unique movements that are inherent to playing, can be difficult and discouraging. Regardless, this instrument is not only rare and particular, it provides a rewarding experience that is incomparable. For some beginner video lessons, visit this website.