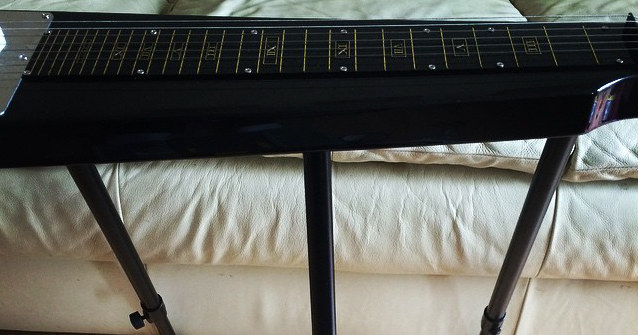 Glen Campbell
Almost everyone is familiar with the guitar, but lap steel guitars are something of an oddity, a rare sight at most concerts and music halls. However, they are becoming more popular and can be found in movies, commercials, and an expanding number of musical genres. These lap steel guitars are placed on one's lap or a stool and are played while sitting down. They produce a slightly twangier, smoother sound than regular guitars, and are sometimes used in Hawaiian and Bluegrass musical styles. There are several differences between lap steel guitars and ordinary or Spanish-style guitars, but they retain the flexibility and complexity of ordinary guitars.

The strings on any lap guitar are raised about half an inch away from the fret board, and the strings are not pushed down to the frets like ordinary guitars. Instead, a metal or glass slide is used in the left hand to make contact with the strings, and this gives the guitar a smooth, gliding sound. This mean that there are fewer chords possible with lap guitars than ordinary guitars, and players must limit their playing to what is possible for them. If frets are present, they are usually only used as markers. The strings are plucked or strummed with the right hand, usually with a pick attached to the fingers although many prominent players do not use a pick.

Lap steel guitars are not usually tuned to the standard guitar tuning of E-A-D-G-B-E. Instead, they are tuned to open chords of various types, depending on the musical style. Blues and rock styles use many open G, open A, open D, or open E tunings. Bluegrass players often use a High G tuning, and Western Swing players use a C6 tuning. The different, stronger build of these guitars allows them to be tuned in ways that would break an ordinary guitar. This has allowed players to get very creative and interesting in their tuning styles.

Today, lap steel guitars are being seen more and more often. Many famous players have used them and continue to do so today, including Ben Harper, John Lennon, and Robert Randolph. Students of the lap steel guitar can look to these artists for inspiration. As is the case with many musical instruments, there is a wealth of information about these guitars on the internet. There are many sites dedicated to free instruction and lessons, and dedication and practice are all that are required to turn a fresh musician into a performing pro.