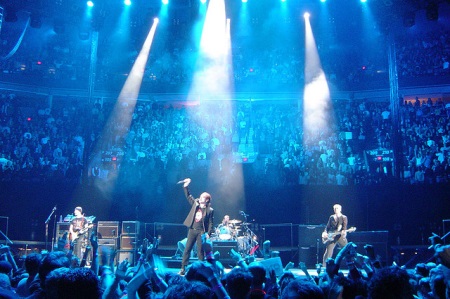 Karen Finley
The rock band known as U2 is no stranger to documentaries and film. In 1988 their award winning rockumentary, Rattle and Hum, hit theaters across the world. The Dublin based band went on to create hit after hit. In 1991 their hit album, Achtung Baby, was released. It hit record sales and become one of the most widely known releases by the band. It was no surprise that this release would lead to a documentary. In 2011 the release of a U2 new film was announced.

From the Sky Down is the latest in the U2 documentary and rockumentary releases. Directed by Davis Guggenheim, this film tells the story behind Achtung Baby. The making of the release, the trials and tribulations leading to the world famous music and the band that brought it all together. The U2 new film created a new standard when it debuted at the Toronto Film Festival. It was the first documentary of its kind to be pre-screened at the festival.

The film was designed to not only tell the story about the making of Achtung Baby, but it was also used to commemorate the 20 year anniversary of the release. The band had full control over every aspect of the film, including who would direct it. Bono and the rest of the band members decided that if a U2 new film would be released it had to be directed by Guggenheim himself. They brought their new director on board for the project with open arms. The director decided that in order to make this U2 new film great they would need to go back to where it all began. Interviews and filming began in Hansa Studios. The interviews were individual, personalized and long. This only added to the background of how everything had come together.

Reviews of the film were mixed at best. Fans had the widest range of reviews with comments ranging from perfection to statements regarding the director's treatment of the bands personal lives. The personal interviews went so in depth, in fact, that several of the band members were noticeably uncomfortable during the interview process. Though the reviews were mixed the movie still went on rank highly with fans and critics. The lowest rating for the film was a meager C+ with the only fault of From the Sky Down being the appearance of ego-driven band members. It was noted, however, that when you are U2 you have the leeway to be a bit ego-driven.

Overall impressions regarding the U2 new film, From the Sky Down, still vary. Fans feel that it was one of the best documentaries ever made. Some fan views and impressions said it was amazing to see the contrast of how Achtung Baby came into being while seeing the conflict and uncomfortable nature of the interview process. It gave insight into the band members and their view of what should be kept private, what is hard to talk about and how personal the entire event actually was.