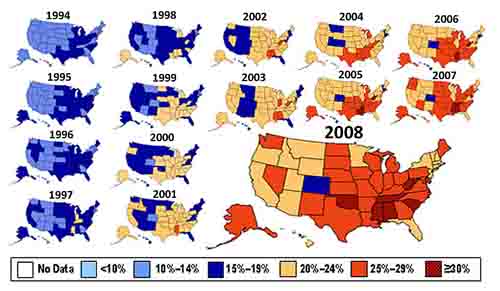 David Sanders
The fattest US state contests have become no laughing matter to the U.S. Centers for Disease Control and Prevention. The obesity crisis and diabetes epidemic is becoming an ever more serious issue with real human and economic consequences. The US Debt to GDP ratio just printed last month at 104%, another indication that healthcare related entitlement programs and the overall budget simply cannot handle it. The resources to tackle the situation being mocked by the fattest US state contests, articles, and blogs don’t seem to be there anymore.

Ok, but who is the Fattest US State?

Apparently, for six straight years from 2003-2008 the champion of obesity was Mississippi. In fact, from a broad perspective, the south has terrible numbers. To this day, there’s still no state in the south with less than a 20% obesity prevalence rate. The saddest thing of all is that, like a storm, obesity rates have soared in every single state in the union.

There are some who believe that environmental pressure is one of the culprits. Historically, and through the lens of evolution, a species never changes its form this quickly. The only thing that is displaying the same behavior is the environment. Climate change is happening fast, and with increasing speed.

Socially, the two main reasons for the fattest US state situation are an overly dependent technological society that doesn’t exercise enough, and a fundamentally flawed food system. Basically, people are eating all the wrong things, almost by force, and then are being told not to move too much.

The majority of things people are stuffing into their mouths these days wouldn’t have passed for “food” or even basic sustenance a few generations ago. Sure, it looks the same, but on a chemical level it’s almost an entirely different entity altogether. As the rise of genetically modified foods (GMO) makes their appearance, no one knows what the long term effects will be on either the human body or nature.

Nations that take this type of thing seriously, who don’t play games, are forcing out and burning GMO crops in fear. Organics and home grown foods are becoming the only escape from the over-commercialized corporate food system where profit means everything, and human health means very little.

Exercise science is being taken out of public schools. Budgets to teach children the importance of BMI are being cut. States are going broke. Food stamp usage has gone to an all time high, reaching almost 50 million people nationally, and at the same time food prices are inflating by the double digits in a matter of months.

Where’s This All Heading?

At the rate America is going, when the dust clears, like in ancient Roman times, only the top 1% will proudly display their bodies while the majority strive to eat a few bites of junk food every day. Unprecedented economic collapse, where everyone is out of shape and connected to the net using virtual head pieces…

Americans need to wake up, and rather than laughing at the fattest US state contests, take the situation seriously, demanding more from their schools and representatives.