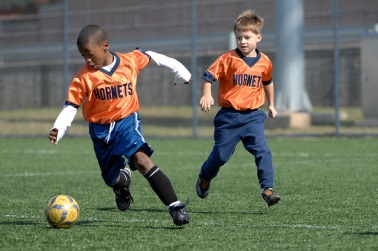 Soccer Training for Anyone

Joe Campbell
Soccer is an old sport that has now become one of the most popular sports in the world. Developed as far back as the second and third century B.C in ancient China, it is a game that has been celebrated for thousands of years. Learning to play soccer at whatever level has for many, many years involved the use of a soccer coach, a professional trainer set to aid you in furthering and enhancing your skills.

With the many varied types of worldwide soccer, from regular footballs with 11 players per team, to the smaller more speedy rural versions such as “football rapido”, played in many South American countries, soccer has become an international and competitive sport. The role of a soccer coach has greatly increased and grown in necessity. The modern soccer coach is a fitness training specialist with a very goal-oriented and sport-specific agenda. He will train you for speed, skill endurance, as well as mental abilities such as strategy, simple scientific properties affecting the game, and maneuvering.

A soccer coach can be found available at several online sports clubs. Schools hosting the sport will often provide a soccer coach for the children involved in the sport. For higher levels such as high school training, the soccer coach can generally be located and contracted from abroad to aid in specialization and technique for the individual.

Learning to play at a pro level can involve training solo with a coach one on one or with an entire team with a group of coaches assisting in the group’s development as a team. Whatever the need, a professional coach will be able to assist and train you in order to fulfill your dreams. Learning to enjoy this sport is a great plus, as it is immensely good for health and recreation.