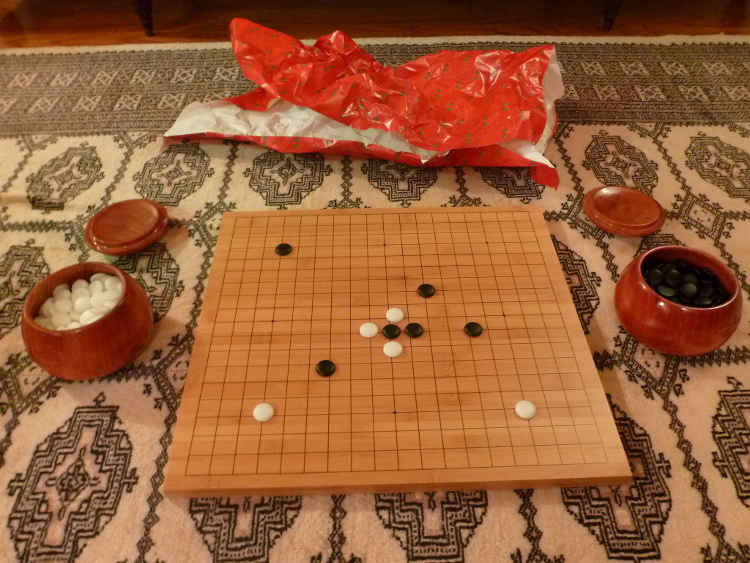 I wouldn’t normally write about something like this, but I received an interesting gift this Christmas.  My family always supports my work, but often on weekends they remind me to take a little time to play—advice that too often I don’t heed.  For this reason, I opened a gift that I didn’t expect.  It was a game called Go.

I have never played and don’t even know how to play Go, but I immediately recognized the game as a central symbol in the movie Pi, by Darren Aronofsky.  I believe that movie was his first, and must have left an impression on me because I still remember both the movie and the game.  (I didn’t know what the game was called at the time, but I remember being curious about it while watching the film, and I can tell this is the one.)

The movie Pi was a surrealist psychological thriller about a mathematician who is obsessed with finding the answer to the key mathematical equation that unlocks the secret to life.  (Aronofsky is the same guy who directed Black Swan.)

Apparently Go has also been argued to be the most complex of all games when it comes to the difficulty in programming it to be played by computers. Thus far, even the best Go programs routinely lose to talented Go players of high ranking. This leads many in the field of artificial intelligence to consider Go to be a better measure of a computer’s capacity for thought than Chess.

So it must be hard to learn, right?  Well to me, this is one of the most interesting points.  It isn’t.  It’s very simple to learn the rules, and didn’t take much time to learn to play at all—way less time than it took me to learn to play Chess.  Yet they say that it can be as complex as you and the player across from you will make it, and even after just two games, I can see how that would be the case.  (Lucky for me the player across from me was learning too!)

I can see why this game would be a central symbol in the Pi movie.  Philosophically speaking, the result of a mathematical equation of life would be as simple or as complex as you make it as well.

When reading the rules and history of the game, I also noticed that Go players all have ranks.  I thought this was interesting because I recognized most of the rank names from martial arts.   It seemed like a blatant rip off, and I attributed it to the influence of martial arts in Asia where the game originated.  I was shocked (and awed) to learn that it was the other way around.  (I was “shocked and awed” after losing a significant amount of stones in a mastermind play by my wife in game two as well, but that’s another story.)

Yes, it turns out this game dates all the way back to 2000 BC in ancient China.  The game came first.  The rankings in martial arts were, in fact, taken from the game.  Now it had my attention.

A game over 4,000 years old, that so far, can’t be mastered by a computer.  I still can’t wrap my mind around that.  A mathematical game that requires the human element to master.  Maybe there’s hope for us yet.