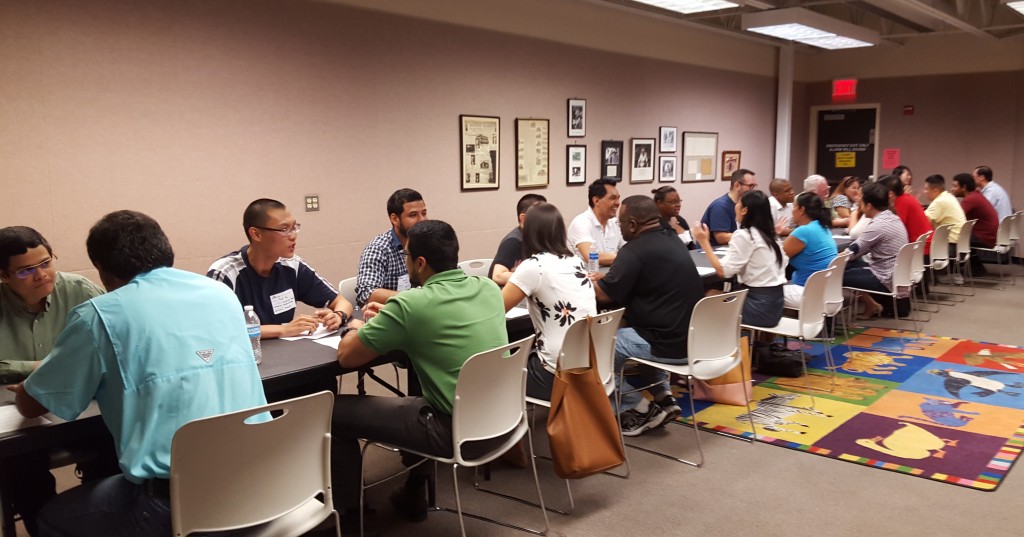 A learning exchange seminar at the public library.

I decided to come up for air this week long enough to write another blog.  (Yes, it’s been a while!)  I’m going to approach this topic for now from my perspective when dealing with a select few who, for whatever reason, don’t get the idea of free learning exchange.  The overwhelming majority I’ve encountered so far have been enthusiastic, but on those rare occasions when the idea has been met with disdain or indifference, I always wonder why.  What is it that bothers them?

The idea of learning exchange as it pertains to languages between adults has been around for years (if you’re reading my blog, chances are you’ve already heard the phrase “language exchange” across the internet), and the idea of a time bank barter system for services has been around at least since the early 1800’s.

When I originally introduced the idea of a peer to peer language exchange community matchmaking program to a local library recently, the idea was met with “we already have a class for that.” “Really?”, I said, “that’s awesome.”  I soon found out she was referring to Spanish and English classes.

She couldn’t fathom, no matter how much I explained it, that 1. there could be a structure for people to match up and learn from each other 2. practicing one-to-one could bridge the disconnect between learning of the subject matter and the actual use in real world situations and 3. people would voluntarily match up to teach their native language in exchange for learning a second language from another person.

In short, I was unable to convince her of the value of learning exchange or to understand the dynamic of bio-feedback that is different when people learn from each other one-to-one.

“Of course, it doesn’t mean the classroom isn’t valuable,” I said, “in fact for many subjects, a structured curriculum is most highly recommended for a basic foundation.  However in those cases, people also almost always benefit from practice and additional feedback of one-to-one learning.  This is why tutors are so popular.” (Blank stare.)

The same week, I had another person tell me that language exchange sounds like a crazy idea because we would be trying to change people’s behavior, so he would need to see data to show that anyone would do it.  (I started to tell him about the 16 million users who at one time were doing it regularly on LiveMocha and other websites too numerous to mention, but decided to drop the subject when he said he had never heard of eBay.)

Finally, I got a very interesting response from a program coordinator at a large church when we talked to her about the idea of bringing a language exchange matching program for Spanish and English to their split congregation as a fun social and educational bridge.  “No thank you,” she said, “we like things the way they are.”  (It was the second part of that sentence that surprised me.  You can draw your own conclusions.)

So why does the idea seem so heretical to some to create a structure for people to match up and learn from each other?  At first, I thought perhaps it was because the idea that one can learn outside of a classroom (ie: the idea that learning takes place everywhere–insert annoying Alanis Morrissette song here) in some people’s minds competes with traditional learning—but as I poked and prodded the uninitiated nay-sayers, it became evident that was acceptable.  They generally got the idea of personal tutors, mentors and coaches—at least as classroom supplements, if not substitutes.

No, as I drilled down to the root of the issue in the case of the people above, it became evident that they started to feel uncomfortable when we removed both volunteerism and currency from the transaction.  They “get” the volunteering and they “get” paying, but for them, bartering knowledge was just a radical concept.

Daniel Ariely’s book “Predictably Irrational” offers some insight. Ariely argues that we live in two worlds simultaneously: The “Market World” where everything is rooted in the exchange of money, goods, competition and cost/benefit analysis; and the “Social World,” where we do favors for other people, and volunteer for charity and community organizations.

Ariely has a useful example to illustrate what happens when you mix the market world with the social world: A day care center was discontent that parents picked up their children late, so they introduced a fine to solve the problem—but instead of reducing the rate of late pickups, the rate rose higher.

Why? By introducing a fine, the day care center switched from the “Social World” to the “Market World,” and the parents felt it was ok to pick up their children late because they paid for it.  For the people I mentioned above, the concept of trading and exchanging knowledge took their social world and their market world, and turned them upside down.

This actually bugged me for a while.  Not because these people would never become LRNGO users (believe me, we don’t have room for everybody yet so I’m just fine with that), but sub-consciously I felt like I should be able to get everyone in the world to see the value in this.  I had shown them real people (both through our seminars and on LRNGO) who made lifelong friends through this process, people who had learned and achieved their goals, and people who thanked us for providing a no cost educational opportunity–all to no avail.

Then I remembered what else these people had in common.  They had never tried it.  In all of our speed-friending events and seminars we’ve ever given for learning exchange, the only complaint I’ve ever heard (other than parking) was that the event and time to meet people is too short.  After trying it, even those who don’t find the right match at first realize the value and opportunity that await when they do.  (It’s like “dating for the mind.”)

I remember one of our speakers, a multi-linguist who speaks seven languages (all learned through language exchange) passionately telling people if they try this, they won’t look at learning the same.  I heard from a member of the audience two months later who told me she found a language partner that night, and they were still meeting once a week…and I remembered his words, “Don’t talk about it, do it–it’s all around you, find someone and learn!”  The idea of social learning and learning exchange may be radical, but an idea is only valuable if you do it.

I no longer feel the need to convert those who are uninspired to the learning exchange concept, because I know they are inspired by other things.  Things they’ve done, things they know about, and things they’ve tried.  The next time I try to tell someone about something I’ve experienced that holds value to me, I’ll remember that too is an exchange, and not every exchange is the right match.  (But when it is, it’s magic.)  🙂

If you’re in the Houston area, feel free to contact me.  I would be happy to do a short 15 minute workshop to set up a learning exchange environment in any adult classroom.