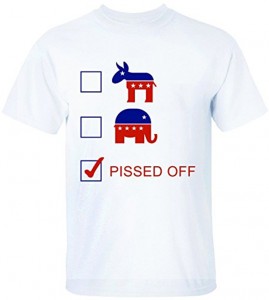 Two-Party System:  A party system where two major political parties dominate politics within a government. One of the two parties typically holds a majority in the legislature and is usually referred to as the majority or governing party, while the other is the minority or opposition party.

2016 may yet go down in American history as the year the media went too far and the majority of Americans began to see the political duopoly as a dog and pony show.

Picture this: two singer piano players are in a Texas night club.  One of them says “Hey, I got $10 to sing the Aggie fight song!”  He begins singing and playing the piano, and those members of the audience empathetic to A&M all join in.  However, he is quickly interrupted by the singer piano player across from him, who says “No, no, no!  Not so fast. I just got $20 to stop that song.  Everybody here prefers UT and knows that A&M is for losers.  Here’s the song we like…”, and he begins to sing the UT fight song.

The crowd sings louder, until they are interrupted by the next incoming funds necessary to stop UT, and turn it back over to A&M.  The rivalry continues, complete with insults back & forth, until the crowd is whipped into a screaming, singing frenzy yelling at each other, and the bid has become too high (over $250) to change the course of the prevailing song.

At the end of the night, you may have sung your heart out for A&M and perhaps even contributed a significant amount, but you don’t care because you had a good time.  However, something peaks your curiosity as you are ushered out the door.  You can’t help but notice the two piano players dividing up all of the money equally, and both seem to be pretty happy.  Then it hits you, they didn’t care who won.  They probably didn’t even go to those schools, but you would never stop to think about that while you were busy screaming at the other team.

So it is with today’s politics.  Internet click-bait, fake news and conspiracies, news on TV and print targeting those who lean right & left and all points in between, and media everywhere trying to “help you” sort out what’s factual and influence your position. Yes, it’s hardball time. Snopes.com the site that sniffs out fake emails and news picks up significantly during election cycles, as does the much talked about Wikileaks from folks who just want to know “the damn truth.”  Is it coincidence that it’s difficult to find an unbiased opinion in a two-party system?  I think not.  Both parties are in this game to win, and facts (real or assumed) are the ammunition.

So who divvies up the money at the end of the show in the two party system?  Democrats & Republicans?  The entities that buy  influence in their legislation as a cost of doing business?  That’s worth arguing about, but let’s take a look at another closely tied benefactor.

Who Won the 2016 Election? The Media: Thanks to “Jerry Springer” Politics.

Much the same way the Jerry Springer show played to the lowest common denominator, this year’s presidential race saw the mainstream media cashing in by taking trash talk to a whole new level, appropriately culminating in a “final showdown” in Las Vegas. (“Gosh”, says the moderator, “you guys are really ‘out of control’ (wink, wink)!”)  Just as the sport of wrestling looks a lot different in Vegas than it does in college, so now does the sport of debate, as the main stream media increasingly borrows the playbook from the 24/7 targeted political news channels.  It’s not their fault that’s how the system works.  It doesn’t matter what the information is, if they fuel the fire and you’re pissed, they’ve done their job to increase viewership and make more advertising money for their shareholders.

2016 Politics: P.T. Barnum might have been proud, but the rest of us are embarrassed.

According to Tom Risen’s article in U.S. News, early on “CNN was reportedly charging advertisers…40 times its usual rate, and CNBC and Fox News soon followed suit.”  The frenzy around the candidates in 2016 and an increasingly unhappy American public helped to create a reality TV atmosphere, which eventually led to an unprecedented “1,120 percent increase from the average cost of a prime-time spot on CNN.”  In other words, in case you haven’t figured it out yet, FOX News and the other networks (including social media) make a lot more money when you’re pissed off.  History has shown that this may not be conducive to solving problems.

Nothing new, you say?  The fact that advertising dollars are now unlimited may not be completely trivial.  As Vince Sadusky (CEO of Media General) told investors according to The Intercept, “Our company is positioned to benefit from unlimited campaign spending,” referencing decisions by the Supreme Court. “We are really looking forward to the 2016 elections with spending on the presidential race alone estimated to surpass $5 billion.”  Or as Les Moonves (CEO of CBS) memorably said, “Super PACs may be bad for America, but they’re very good for CBS.”  It may be no coincidence that he later said the exact same thing about Donald Trump.

Am I suggesting that the media pushed Donald Trump (or at least went along with it) simply because of the perception that he would make them more money?  It may have been a factor.  Allan Smith in Business Insider says, “Earned media typically dwarfs bought media for presidential candidates, but nowhere near the level of Trump. With almost $2 billion of value estimated in earned media, Trump’s total is more than double that of Hillary Clinton…and more than six times the estimated earned media value of the No. 2 Republican candidate on the list.”

That looked promising in the beginning to Republicans who thought he could get their message and slogans in front of the American people.  However, the problem they eventually realized was that they couldn’t take Trump out of the message.  The same unpredictable sensationalist personality that was so entertaining and profitable to the media eventually became a liability to the Republican party.  Some of them saw it coming, but there was so much momentum by that time that it was too late.  The results were surreal: “almost” endorsements for Hillary Clinton from the likes of the Koch brothers and Glenn Beck.  And there it is.  It’s only business, and you’ve been had.

Fight promoters whether wrestling, boxing or MMA recognize this right away.  The personality that makes people the most inflamed creates engagement, and is therefore the most valuable—but only for as long as it’s believable.

2016 is the year the majority of Americans finally realize our duopoly is a dog and pony show.

If you Google the term “jumping the shark”, you quickly find it means an unbelievable occurrence seen as a desperate attempt to keep viewers’ interest.  The term is taken from what is generally seen as “the demise” of the TV show “Happy Days,” when the writers had the main character Fonzie jump a shark to get viewers back into the show which was losing ratings.  Instead it had the opposite effect, because viewers could no longer willingly suspend their disbelief.  It was perceived as too “over the top.”

We’re hearing “jumping the shark” a lot in politics now, thanks in no small part to Trump’s tirades.  Going into the 2008 election, there were a significant number of people who believed the CIA, FBI, and Secret Service didn’t have it together and couldn’t tell that Obama was really a Muslim terrorist who was born outside of the United States. (It must be true: my friends said it on Facebook, I read it online, and I heard it on TV!)  To be fair, some of them didn’t believe those agencies could be that incompetent, so it had to be a conspiracy–because you know, the CIA and FBI and Secret Service might have a good reason to want to propel a Muslim terrorist to the top of our political system.  However, people were no longer so quick to jump on the band wagon when Trump recently suggested one of his political rivals may have been born in Canada.  It became less and less believable.  It’s a one-trick pony, and people are now starting to question how much, if any, of this is real.

If the Donald Trump phenomenon has done anything for this country, it has helped people on both sides of the aisle make the connection that when Trump contributes to both parties, Goldman Sachs and the other large banks and conglomerates also contribute to both parties, and none of it has much to do with ideology.  It’s business, and business is a priority that doesn’t change, regardless of party affiliation.

So is the media itself that fuels American two-party politics in danger of “jumping the shark”?  On the surface, it doesn’t seem to matter.  The more outrageous and silly “the political circus” gets, the more viewers tune in and seem to be engaged.  However, the media may have finally crossed the line in underestimating their audience, which may in turn have a weakening effect on both political parties.  The “you’ve got to be kidding” factor is quickly reaching an “over the top” level, and when the majority of people stop taking political parties seriously, the audience starts looking around.  They may not see who’s divvying up the money yet, but they are getting to the point where they know it’s happening.

Politics 2016: Collective human intelligence in exchange for entertainment is not Fair Trade.

Our two-party political system with integrated media circus may be good for ratings.  It may also be good for holding our attention and creating engagement.  However, it hasn’t been good at helping us solve problems or foster cooperation, and the current climate of sacrificing intelligence for the sake of entertainment makes us culturally dysfunctional.

Michael Coblenz in thehill.com said, “…the ‘national’ debate presents every issue as a simplistic duality, which trivializes everything. This duality is making our political debate stupid. We can’t solve problems unless we can discuss them rationally, and we aren’t having a rational discussion about anything.”

At this point in our history, it may be worth debating whether a multi-party system (or even a no party system) of campaign reform is in our best interest to bypass constant political football and focus on actually solving issues.  Ironically, the American people might have finally reached the point where an honest debate about that topic could pull in the highest ratings of all.