Great Britain rose to power on the world stage in 1588 with the defeat of the Spanish Armada and her magnificent fleet of tall ships. Britain’s dominance continued for many centuries in many fields. In 1684, Sir Isaac Newton published Principia and ushered in industrialization and a new era in modern science. Britain reigned as a world leader for nearly four hundred years and left the stamp of English around the globe. In 1945 at the end of World War II, her authority passed directly to the United States of America. These two back-to-back superpowers happened to share a common language. Between them, they effectively established English worldwide as the language of commerce, technology and science for generations to come.

There are 1.5 billion people learning English in the world today. As you can see in this pie chart, learners of English outnumber native speakers by a margin of about four to one. 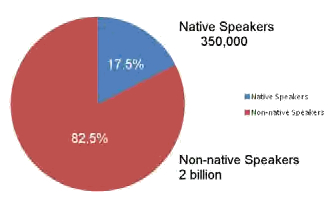 The English language is the most sought after commodity in the history of the planet, and to date, there has never been a particularly effective way to teach it.

Students who study English in school learn primarily about reading and writing and are frustrated that the speaking doesn’t follow. The fly in the ointment is the Latin alphabet.

The heart of our trouble is with our foolish alphabet.  –Mark Twain

There is no crossover from written English to spoken English through the alphabet. Therefore, no one can learn to speak English from reading it. In effect, written English and spoken English developed separately into completely different languages and must be taught that way for students to be successful. Traditionally, the grammar, spelling, punctuation and reading skills taught in language classes are all about writing and simply do not relate in any meaningful way to the mumbling, grunting, inflection, pausing and gestures that somehow work together to make conversation.

Think back to how you learned your first language. Human beings acquire their first language as toddlers. They learn to speak by mimicking those around them. There is no formal understanding of the mechanics of any language in order to speak it. The process is acquired subconsciously. Conversely, grammar and spelling are parts of language studied in school sometime after the age of six. You were a master of using grammar before you learned the names of the parts of speech.

The heart of our trouble is with our foolish alphabet. -Mark Twain

First language skills are acquired in this order:

English has no clear-cut relationship between the alphabet and sounds; therefore, the language learning process cannot be reversed. No one can learn to read or write in English and expect speaking English to follow because the skills are unconnected.

A specialized approach is required to unlock the unconscious aspects of oral English in order to effectively teach or learn English as a second language. That’s what this book is about. Speaking is not simply writing spoken out loud. Speaking and writing are completely different skills that use different sets of rules. The simple set of six rules in this book addresses all aspects of oral communication. A clear understanding of the distinctions between writing and speaking provides a powerful place for learners to start.

Reading and Writing Use

Speaking and Listening Use

Writing and speaking are different language skills, and they have to be taught with separate rules.
Author Judy Thompson is a professor, ESL teacher trainer, pronunciation expert, TEDx speaker, and thought leader in English speaking education. She has a degree in English and TESL, and over a decade of experience in adult student ESL and English teaching. She has produced two text books, a curriculum, and a sound dictionary, and is the founder of the Thompson Language Center.  Judy has also conducted workshops for teachers and international students in 15 – 20 major colleges and universities, as well as spoken at TESOL and TESL conferences as the keynote speaker.

One thought on “English is Stupid”