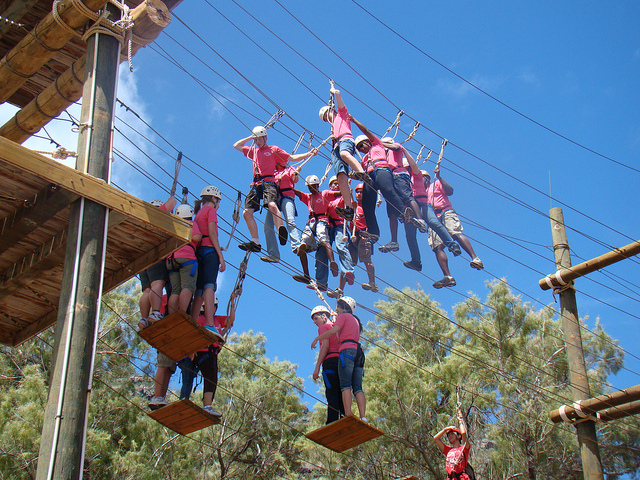 Since the future of learning is a hot topic these days (it’s about time), I wanted to write a personal and community development perspective about some of the positive side effects that have been documented by individual adult participants in communities who have created or used systems to connect informally to learn from each other.

However, as I started to write, it became evident that I couldn’t get far without addressing the elephant in the room that is credentialing.

This is not a commentary on institutions or traditional learning, and should not be looked at in “either, or” terms.  Rather, the focus is on “why not?”, and looking at the positive benefits of encouraging institutional education, while also encouraging people to access each other as individuals to obtain skills and knowledge for  personal growth and take learning into their own hands.

When we started the LRNGO, we got some pushback about credentialing.  At one of our forums, someone even said, “People can’t just teach and learn from each other without regulation.  My mother is a teacher!”  I found this ironic, since teaching is the very behavior we were trying to promote.  However, I also understood that the idea of teaching and learning taking place without certification might be a foreign concept to those who only think of the word “teacher” in the context of classroom management or formal education.

While I am quick to agree that I would prefer certified training before a doctor opens me up for heart surgery or before an attorney represents me in a court of law, I also believe that, as a student or learner, there are many instances where I am capable of assessing whether or not I have benefited from a class, course, or private instruction in which I have participated.  I’m also sure I’m not the only one who has ever received a certificate that I would have given back in return for the cash I paid.  So in the case where learners and students are looking for results rather than a badge or degree, above all else, shouldn’t their perception of those results matter?

Rather than arguing whether credentials are always necessary, what if we focused on whether learner feedback is helpful—not just for other prospective learners, but also for the instructor?  It’s worth arguing whether evaluation should be based solely on the perception of the participants, but it may be worth arguing whether it should be based solely on certificates and credentialing as well.  They are both simply indicators of knowledge received, the results of which are then measured in multiple ways dependent on many variables.

Learning is not a waste of time simply because it didn’t come with a badge.

I have also heard the argument that learning without credentials is a “waste of time,” as if the lack of a credential somehow makes the skill less actionable. Learning can be actionable or not actionable depending on what you do with the knowledge afterwards. So if knowledge is power, is it a waste of time to be empowered simply because the result didn’t come with a badge?

In many cases, we are told that the end result of the credential is more important than the knowledge itself. For instance, we often hear the statement “studies show people are twice as likely to earn more money if they have a credential or degree. This statistic sounds true enough until you look at it in context. If you consider the demographics of US college students before they attend, you see the majority were already twice as likely to earn more money because most of them started with more resources, which was how they got into college in the first place.  It’s a lot like saying, “studies show people who have money worry less,” and using it as a selling point.

Regardless of whether statements like these are true or simply made by those who have a vested interest, it’s hard to argue that credentials have not traditionally been a means for perpetuating inequity (ie: mostly available to those who can afford them).

Credentials have traditionally been a means for perpetuating inequity.

The point here is not that credentials can’t have value, but wouldn’t it be empowering for everyone at all income levels if we knew who around us at any given time possessed the expertise we needed and was willing and able to help us learn?  What would happen if this were the case in every community, city, country, or even the world?  That’s the question a couple of college students asked in Chicago in 1971, and the answer they found is as relevant today as it was then.

“The operation of a peer-matching network would be simple. The user would identify himself by name and address and describe the activity for which he sought a peer. A computer would send him back the names and addresses of all those who had inserted the same description. It is amazing that such a simple utility has never been used on a broad scale for publicly valued activity.”