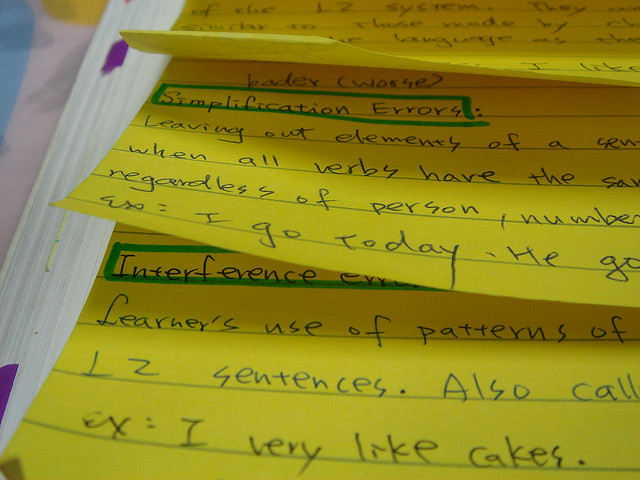 Lillian Xi
I took Spanish for five years, and I can honestly say that I cannot say a thing in Spanish. I can sort of think I can say sentences in my head, and I’d like to think that I can understand the chef at my other job who literally only speaks Spanish to me, but the honest to god truth is that I probably speak like a two year old and understand less than a Latina kindergartener if it weren’t for nonverbal communication. I promise you that the information I learned in Spanish my freshman year of high school was pretty identical to the Spanish grammar that I learned my freshman year of college, but after a while all of the tenses bled together, and I couldn’t for the life of me remember what irregulars went with which tense and why or how to use it in a sentence. Basically, I was hopelessly lost in the realm of grammar, and memorizing vocab words wasn’t helping me with jack squat.

So in light of my dramatic failures when it came to forcing myself to learn Spanish grammar, I had a grand time overcompensating with vocabulary exercises which will do just as well for those of you trying to learn English vocabulary.

EXERCIZE #1: Watch television in English and write down nouns and verbs that you either do or do not recognize.
In general, if you would consider yourself good at English, write down words you do not recognize; on the other hand, if you consider yourself not as good (like I would for Spanish) write down the words you do know with a couple of extra easier ones you can hear clearly. I would recommend watching a show targeting a younger audience—the vocabulary is less challenging, and words are often repeated more frequently, the nonverbal cues are more prevalent, and the characters usually speak slower than on other shows. I have heard a lot of success stories of people learning an alternative language by watching television in that language. Immersing yourself in pop culture in a different language can help you understand words in context, and writing them down helps solidify the meaning.

EXERCIZE #2: Speak and listen to others speaking casually in English as much as possible.
As much as I hate to say it, sitting in your house and practicing speaking to yourself really isn’t going to help you learn English. The easiest way to practice the oral component of this new language is to speak it to someone who already speaks the language. Speaking with someone who is trying to learn with you can only get you so far. Getting a language partner is one of the easiest ways you can guarantee good and productive practice time. Spend a half hour talking to them in English while they give you corrections, and then let them talk to you in your native tongue. If at all possible, do not avoid the language. Speak English when you can and prove to yourself that you aren’t embarrassed to make mistakes and learn from them.

EXERCIZE #3: The good ol’ fashion way.
As much as it sucks, a textbook really is one of the best tools when it comes to learning a language. They provide not only the foundation but detailed explanations of exceptions and copious examples. Unfortunately, while a textbook is filled with wonderful information, just reading it won’t do anything for you. You need to actually study the material which means outlining the pages by hand, making flash cards, and repeatedly drilling the information into your head. There are also plenty of online practice tests that will help clarify what you do know and what you need to review.

Ultimately, learning a new language was one of the most frustrating tasks I’ve ever attempted but had some of the most rewarding outcomes. I kind of lied when I said I couldn’t speak a thing… I do live in Houston, so speaking a bit of Spanish is just about essential. Sometimes it feels like it though; it can feel like a lot of work and studying is amounting to very little progress. It’s the reason a lot of people quit and give up, but being able to speak to a cashier in her native tongue or helping a customer with simple orders in Spanish has been a great reward, one I’m hardly able to contemplate. Don’t give up, seriously, having a spare language at your side with a relevant vocabulary and passable grammar is worth the challenge.